Any fan of the Star Trek series is familiar with the Borg, an alien species that incorporated technology into their bodies. They went throughout the galaxy “assimilating” other species, always announcing that “Resistance is futile.” Trekkers know that not only was resistance not futile. It was ultimately successful.

Resistance to the Trump Republican takeover of America on January 20, 2017 began the night of November 8th, as the devastating electoral college results came in. Resistance is growing, networking, and becoming more effective. Resistance must be broad base and inclusive. We cannot afford to be ideological “purists” and work against other progressives just because they don’t espouse our exact values.

The Egg Harbor Township Democratic Club will be the heart of resistance in this area. America, “the last best hope of earth,” as Lincoln stated, is too precious to abandon to squalid Republican leaders and their right-wing extremist program.

Jim Wallis, a progressive religious leader, has written a six-point program of resistance for Christians and anyone else who wants to take action against the incoming Trump government.

3. Use Media and Social Media for Moral Purposes

4. Stand Up to Hateful Words and Acts

The full article is found at Resistance is Patriotic – and Christian

A more detailed guide to resistance is found at Indivisible: A Practical Guide to Resisting the Trump Agenda. This “how to” guide was created by former Congressional staffers – people in the know! Their stated reasons for making this guide – a work in progress – is:

“We wrote this guide because we believe that the coming years will see an unprecedented movement of Americans rising up across the country to protect our values, our neighbors, and ourselves. Our goal is to provide practical understanding of how your Members of Congress (MoCs) think, and how you can demonstrate to them the depth and power of the opposition to Donald Trump and Republican congressional overreach. This is not a panacea, nor is it intended to stand alone. We strongly urge you to marry the strategy in this guide with a broader commitment to creating a more just society, building local power, and addressing systemic injustice and racism.”

Go to their web site, download the guide, and get to work! Indivisible

Rex “Call Me Comrade” Tillerson and Vladimir “The Hacker” Putin

Putsch: a plotted revolt or attempt to overthrow a government, especially one that depends upon suddenness and speed.

During the spring and summer of 2016 rumors of the Russians hacking into the files of the Democratic National Committee spread throughout the land. The Republican candidate for president, acting in his usual reckless and irresponsible manner, asked the Russians to hack into Hillary Clinton’s files. This is the first and only time a candidate for the presidency requested a foreign power to interfere in an American election. And, that power did just that.

American intelligence gathering agencies found ample proof that the Russians were trying to interfere with our democratic elections. Seventeen American intelligence agencies found evidence that Putin’s Russia was making the unprecedented attack on the integrity of an American election. President Obama was rightfully concerned, and convened a secret briefing for congressional leaders, most of whom were greatly disturbed by evidence. But, not all. Certainly not the Senate Majority Leader Mitch McConnell who refused Obama’s request for a united, bipartisan stand against Russian hacking. No, the Senate leader, whose party professes “Country First” put his party first. But, then, it’s not like that hasn’t happened before with other issues. Just, not with Russian sabotage. But, it has paid off for McConnell. His wife, Elaine Chao, has been named by Trump to be his Secretary of Transportation, a reward so much better than a case of Russian vodka and caviar.

Now more and more information about Putin’s Putsch is coming out. As reported in the New York Times on 12 December 2016:

Did he [Putin] seek to mar the brand of American democracy, to forestall anti-Russian activism for both Russians and their neighbors? Or to weaken the next American president, since presumably Mr. Putin had no reason to doubt American forecasts that Mrs. Clinton would win easily? Or was it, as the CIA concluded last month, a deliberate attempt to elect Trump?

In fact, the Russian hack-and-dox scheme accomplished all three goals.”

Of course, Trump, our new Fearless Leader, who just told us that he’s “like a smart guy,” says that he is certain his Russian buddies would never interfere in an American election the CIA can’t be trusted and he. The “like a smart guy” said that the American CIA can’t be trusted. He didn’t mention the other 16 intelligence agencies – if, in fact, he is even aware of them.

On top of the non-stop love-fast Trump shows for Putin, he has named Exxon CEO Rex Tillerson to be the American Secretary of State. Tillerson has never had any other job in his adult life other than working for Exxon. Exxon’s financial web in Russia is vastly and lucrative, with Tillerson one of the chief spiders weaving that web. So lucrative is Exxon’s Russian investment that Tillerson criticized the American response to Russian expansion. So, when Putin invades and seizes the land of a neighbor on a scale not seen since Nazi Germany in the 1930s and 1940s, Tillerson’s over-riding concern is Exxon. Not European stability. Not global concerns over the militaristic expansion of a dictatorial government. Certainly not the concerns of the American government.

Even conservatives are alarmed with Trump’s nomination of Tillerson. Arch-conservative Charles Krauthammer is worried, stating that with Tillerson “What you’re getting is a second novice. Meaning somebody without direct foreign policy experience, and somebody who received an Order of Friendship from a guy who is not our friend and that’s a problem.” Since Putin awarded the Russian Order of Friendship to Tillerson in 2013:

Since then, Putin has invaded Ukraine, murdered 298 civilians on Malaysian Airlines Flight 17, and directed the Russian Air Force to attack aid convoys and hospitals in Syria. Yet Tillerson has remained a staunch and vocal opponent of sanctions against Russia, even as Putin’s body count continues to climb. See “Why Rex Tillerson would be a disaster as Secretary of State,” Douglas E. Schoen, Evan Roth Smith, FoxNews.com, December 13, 2016

But, the situation is even worse. When a resurgent Germany under Hitler began to throw its weight around, European leaders chose a policy of appeasement, hoping to tame the expansionist aims of a dictator with a massive military. Trump is getting ready to move into the Kremlin White House, and his Republican government that will take over America on January 20, 2017, is adopting an appeasement strategy with another resurgent, expansionist, dictatorial European power with a massive military – and 7,300 nuclear warheads. The prospects are chilling. 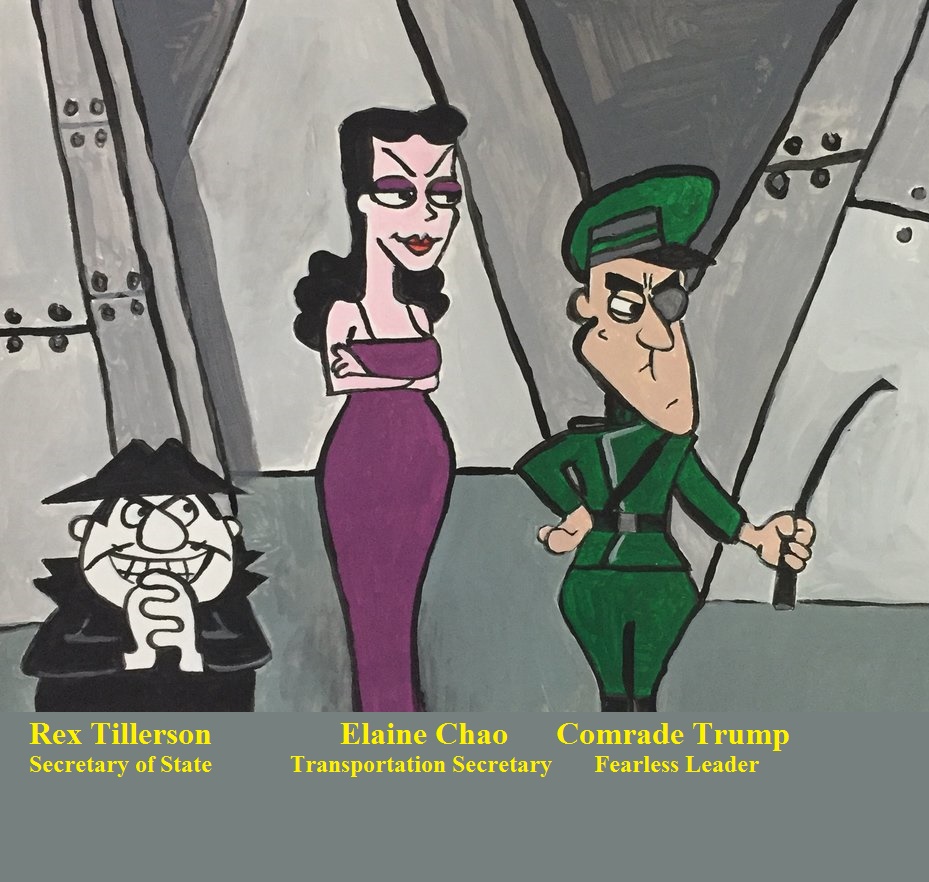 Last night I joined a few well-bundled individuals in Hammonton, NJ, to protest the appearance of Trump’s campaign manager Kellyann Conway in the Christmas parade. While Conway’s echoing of the Trump distortions no doubt caused her to invest heavily in fire-proof pants, she was graciousness itself in accepting the Keys to Hammonton. She asked the crowd to pray for “the current” president and vice-president (she couldn’t bring herself to utter their names). The crowd responded with little approval. But, after she asked them to pray for Trump the cheers were louder than those for Santa Claus. And, this parade was supposed to be about him! These people were cheering a man who daily shows he has little regard for governing this great nation with responsibility. A man who daily proves that his own financial worth will take precedence over running the largest economy in the world. A man who appears to work hardest at one thing: finding the least qualified people possible to run the American government.

There is a story about Benjamin Franklin coming out of the secret Constitutional Convention being held in Philadelphia. The Framers of the Constitution battled daily over how much power would be allocated between federal and state governments. The argued over how trustworthy the average citizen was when it came to a democratic society. The Constitutional Convention’s secrecy created fears about what was being done. So, as Franklin left what we now know as Independence Hall a woman stopped him and demanded, “Well, Dr. Franklin, what type of government have you given us? A monarchy or a republic?!” Franklin’s emphatic response: “A republic, madam, if you can keep it!”

While Trump lost the election that was held on November 8th (NEVER forget that!), with Hillary Clinton now winning that election by 2.7 million votes, the Electoral College will probably elect him president of the country.

But, how long will our republic last when nearly half of voters in a presidential election vote for a man who prides himself on bankruptcies, not paying taxes, and scamming regular working Americans? Nearly half of voters in the last election chose someone who openly mocked a man with disabilities and bragged about being a sexual predator. A man who’s appeal to hatred has caused a growth in hate crimes and speech. As bad as that is – and it is very bad, indeed – the Rachel Maddow segment below shows that the situation is worse. It is the most alarming warning sign that the American Experiment in self government is in grave jeopardy.

Donald Trump’s campaign manager and chief enabler will be in Hammonton, NJ for the Christmas parade. Protesters will be gathering in Hammonton around 6 pm in order to show the world that South Jersey won’t meekly accept the expected decision of the Electoral College. We know that Trump LOST the election of November 8th, as Clinton now has 2.7 million more votes than Trump! The loser has become president in 40% of the presidential elections in the 21st century. It is time for majority rule.

For further information send an email to ehtdemocrats@gmail.com or call 609-798-1348.